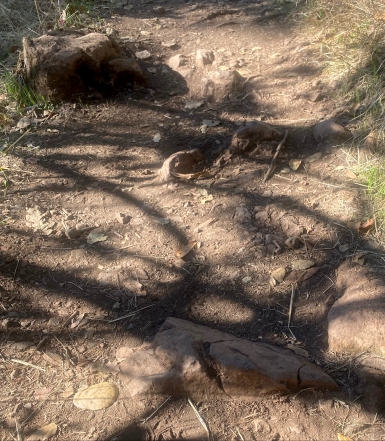 A short rocky section of trail.

When I became the Maintenance Chair for the Sonoma Overlook Trail Stewards, I stepped into a role of responsibility that I never thought I would take. But it has been surprisingly interesting and rewarding. I’ve learned a lot along the way, particularly by also volunteering with the trail maintenance team at Sugarloaf Ridge State Park. Along the way I’ve invented some things. One of them I dubbed “Rock Patrol,” introduced in a previous post.

Since then, I’ve realized that there are two different activities, not one—rock patrol, which is a solitary task of removing individual problem rocks from the center of the trail and infilling with soil, and tread renewal, which is a more systematic effort of rock removal from a section of trail and a renewal of the tread with gravel and/or soil. You more often do tread renewal with a team, but not necessarily. 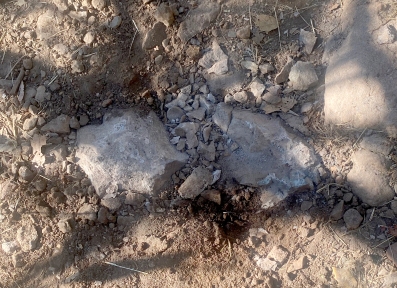 Today I went out and blurred the lines between the two, as well as pioneering another technique, that I’m calling rock reduction. There are some rocks in the trail that can’t be removed, as they sink too deep into the trail or are bedrock. However, I’ve found that many rocks on the trail can be “reduced” by striking them with a steel prybar and chipping pieces off the top and/or fracturing parts off the side. By using both of these techniques it’s possible to reduce the level of the rock below the trail, and then covering it over with soil. The picture shows the rock at the bottom of the first picture that has been “reduced” to the point where it can be covered. 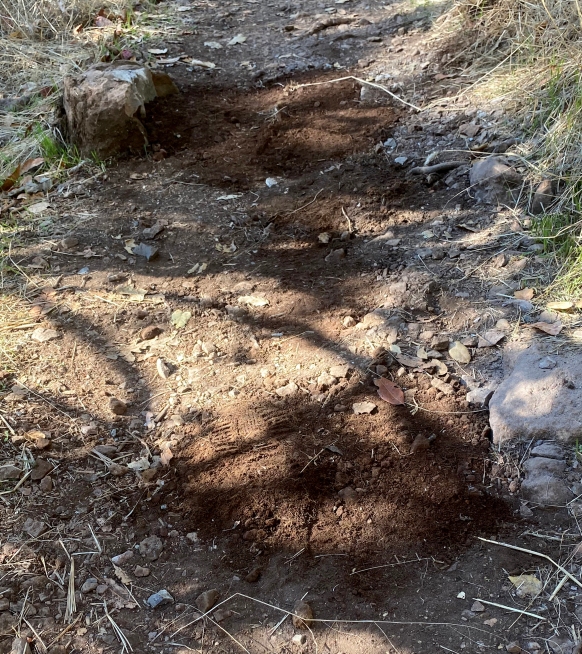 The point is to create a smooth tread that fails to trip hikers, and especially runners, as they traverse the trail. As someone who has fallen badly a few times when trail running, I understand the importance of removing (or reducing) trip rocks.

We understand that this work can only progress at a snails pace, as each section of trail requires a good deal of effort. But progress it will, and like our efforts to reduce and control invasive species this is a long game. And we know exactly what a long game requires.

Today’s project had a further nuance. If you look at the first picture, at the rock at the top left of the trail, compare it with the bottom picture. We successfully reduced it’s width by breaking the side of the rock impinging on the trail, therefore widening the clear path. Nuance like that can easily be overlooked, but it matters, as it produced a wider smooth trail. Eventually, every inch of trail will have had this kind of attention.