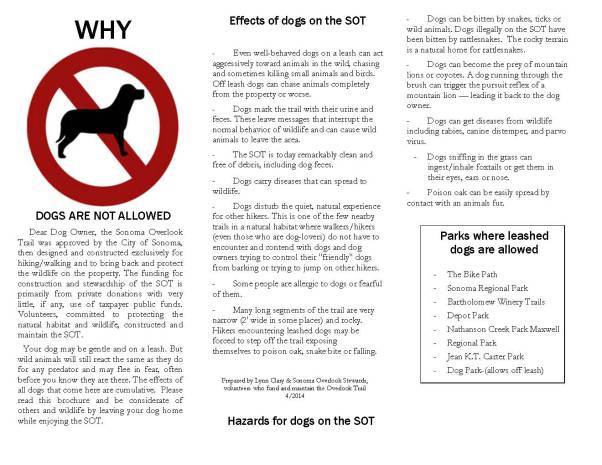 Look for this brochure at the SOT kiosk.

Dogs are not allowed on the Sonoma Overlook Trail or Montini Preserve at any time. Signs are posted at all trailheads, and a brochure is also available at the kiosk. For information on areas in Sonoma Valley where you can bring your dog, visit SVDog.org. To report dog violations, contact Animal Control at the Sonoma Valley Police Dept: (707) 996-3602, or -3601 on weekends.

Much confusion has resulted from the City of Sonoma’s proposed amendment to allow dogs on Montini Preserve, which was rejected by the Sonoma County Agricultural and Open Space District in February 2015. Read the SCAOSPD letter here.

The following are just a few reasons why dogs are still prohibited.

1. Montini was acquired as a Preserve to conserve a rich diversity of wildlife and plants and to give urban dwellers an opportunity to enjoy largely undisturbed nature.

2. The Montini hiking trail was designed for minimal human intrusion. Many of the trail users are seniors and children and dogs can force hikers off the narrow trail – especially in places that are steep with sharp drop offs – exposing them to poison oak, rattlesnakes, ticks, etc., as well as injury.

3. The trail is experiencing much heavier use than originally forecast. At a very conservative estimate, there will be 20,000 visits annually. Visitors include people of all ages, including families with small children. In addition, Sonomans have many places and many miles of trails on which to walk their dogs on leash, including the downtown Bike Path, Fryer Creek path, Nathanson Creek path, Maxwell Park, Bartholomew Park, Ernie Smith Park, Sonoma Valley Regional Park and the SDC.

4. The City’s own biological impact study said introducing dogs would be likely to have widespread and long-lasting effects on the Preserve’s natural resources. Dog feces carries pathogens not found in wild animal scat and can introduce illness and parasites into the area that can spread to foxes and coyotes. When dogs urinate along the trail, they are marking the area as their own. This marking affects the behavior of other wildlife. Other canines (foxes and coyotes) will spend time trying to locate the intruder, instead of hunting, resting or caring for young. For more information about the potential impacts to biological resources, please see the Biological Resources Evaluation Report.

5. Your dog may be gentle and leashed, but wildlife will react to them as they do to any predator, They may flee in fear, often before you know they are there. Even well-behaved dogs will give chase to small animals and birds.

6. Dogs disturb the quiet, natural experience for other hikers. Montini is one of the few trails in a natural habitat where walkers and hikers do not have to contend with them. Dog feces attracts flies, creating an unpleasant trail environment, is visual garbage, and takes away from the natural feel of an area. Take a visual tour of the dog waste problem.

7.  Dogs are curious. They will look around rocks and fallen logs. Snakes warm themselves in these areas, putting the dog in danger of being bitten by snakes, including rattlesnakes.

8. Some people are allergic to or fearful of dogs.

10. Conversations with hundreds of hikers in recent months indicate a strong sentiment to uphold the conservation values that are part of the Montini Preserve Management Plan.  The SOT stewards and Montini Patrol have collected hundreds of signatures from hikers on the trails (a good many of these people are dog owners and lovers) and via the online petition in support of protecting Montini’s natural resources by keeping it dog-free.

NOTE: SVPD Animal Control is actively ticketing violators in the Mountain Cemetery and on both the SOT and MP trails.

A. Dogs are prohibited in all areas of Plaza Park, the Montini Preserve, and on the Sonoma Overlook Trail, regardless of whether they are restrained by a leash. Dogs are permitted in all other city park facilities, except in children’s playground areas of any city park; provided, that a waste bag dispensary is located within the park facility, and such dog is under the control of a competent person and under restraint by a leash not to exceed six feet in length. As used in this section, Plaza Park shall mean that property used for park purposes surrounded by 1st Street East, 1st Street West, Napa Street, and Spain Street, but excludes the sidewalks nearest the roadway and the area inside the park used for vehicular traffic or parking.

This video documents just one impact of dogs: