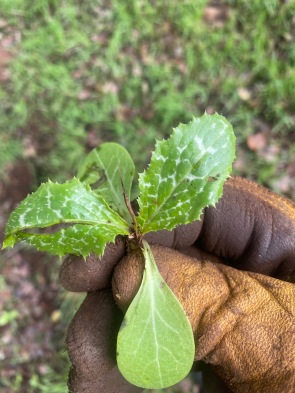 Today I realized that the invasive species removal season had started — earlier than it ever has during my tenure. The earliest I had started removing Italian thistle from the Sonoma Overlook and Montini Preserve properties had been in December. But now, with our early rains this season, the thistle has already started coming in (see pic).  This essentially cuts my “down time” from four months to three, meaning the thistle removal season is going to be nine months long this year. Ouch!

One nice thing, though, is that I will have a three-week “vacation” in May, when I put in on the Colorado River rowing an 18-foot raft for 17 days. Since I just recently got off a 19-day trip doing the same thing, call me one lucky guy!

But mostly I’ll be out there, day in and day out, pulling these plants so that we can eventually eradicate them, as we almost have with the Yellow starthistle.