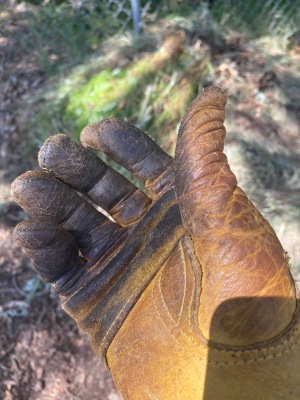 The weapon of choice, with a pile of vanquished foes in the background.

I am very happy to announce that after years of work, and over three months of constant and focused effort this season, we have reached a major milestone in our fight against invasive species. For the first time ever, we have pushed the Italian thistle back away from all of the named trails on both the Sonoma Overlook Trail property and the Montini Preserve.

I am not making this declaration without first traversing all of the named trails (close to 5 miles of them) and inspecting them closely every step of the way. It doesn’t mean that I haven’t missed a plant or three, but it means that if I’ve missed something it wasn’t for a lack of trying. [To be clear, as of this writing the trails are closed, but I have official permission to only do maintenance work on the trails.]

This was our first goal for this season, and the fact that we were finally able to accomplish it is an indication that the situation along the trail is improving. Many areas (primarily on the Overlook, where much of our past efforts have focused) were much easier to clear this year than last year. But of course a great deal of work remains.

That continuing work will now focus on complete eradication in areas where it seems possible, preventing further spread, and tightening the noose on large infestations. We may also experiment with covering dense clumps with plastic and letting the sun do our job for us.

Those of you who would like some background on this decades-long battle can read our past posts “Why We Fight,” and “‘Don’t Look Up’ and Other Lessons from Invasive Species Removal.” Or perhaps you shouldn’t. Yeah, that’s the ticket, probably better to read a novel, now that I think about it. Or literally anything else.