The Lodge at Sonoma Renaissance Resort & Spa has long led hiking trips on the Sonoma Overlook Trail. Under the able leadership of Dan Noreen, Beverage Director and Sommelier, who is also an accomplished naturalist (seriously, where does it stop?), the Lodge offers daily hikes on the trail that are frequently populated by any number of Sonoma visitors, from one to 30 or more. Dan leads a special nature hike on Friday mornings, while on other mornings one of the coterie of the Lodge’s yoga teachers, who hold a class just before, lead a hike. As a daily hiker myself, I know all of them, and welcome them and their groups on a daily basis.

Since the trail is a free and open resource to all, that could be the end of this story. But Dan and his staff want to give back to the trail so they do and have for years. For the last three years the Lodge has coordinated with the Trail Stewards to send a large team on Coastal Cleanup Day. This time the group did a general cleanup and weeding at the trail kiosk and entry steps, and fortified a nearby wood staircase with cement blocks. Trail Stewards Fred Allebach, Joanna Kemper, and Bill Wilson provided materials, tools, and direction.

As always, we greatly appreciate their volunteer efforts to help maintain the trail and the property as the wonderful resource that it is — not just for our local community but also for our valued visitors from around the world. It takes a village, and we’re delighted to have their participation in that community of support. 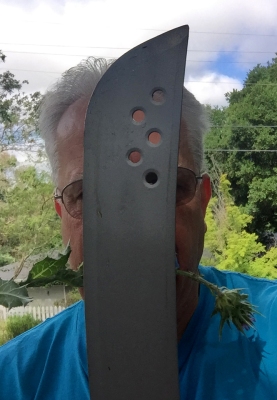 Long-suffering readers of this blog are probably saying to themselves, “Oh no, here he goes again!” And that is perfectly understandable, as during invasive species removal season (essentially the first six months of the year), I’m obsessed with it. I admitted this nearly four years ago, and the disease sadly continues unabated. So here we go again. Buckle up, buttercup.

For years now, the primary method we’ve been using to fight invasive species (first Scotch Broom and Yellow Star Thistle, now Italian Thistle) is pulling. Early in the season we can just pull and drop the weeds, as they are not in danger of going to seed. But later we pull it, bag it, and carry it out. After years of doing this, and largely being successful against the Yellow Star Thistle (which has yet to be spotted on either the Overlook or Montini properties this season!), I’ve become discouraged at the progress against Italian Thistle.

Unlike Yellow Star Thistle, which grows only in open meadows, Italian Thistle will grow anywhere. It’s rampant on the Montini Preserve, although we may still have a chance at reducing it on the Overlook. For the last couple years I’ve focused on pushing it back from the Overlook Trail to prevent it’s spread. For some sections of trail I’ve also been able to completely eradicate it this season. I’ve noticed some progress from last year along the trail, but this must be compared to areas where it has now spread, mostly into areas where the Yellow Star Thistle had been cleared.

Although pulling remains the only sure way to reduce the extent of thistle, we’re getting close to the time when the seed is produced (some already has) and at my current rate of pulling there are going to be a lot of areas that I won’t be able to address. So I’ve decided to take a chance at cutting it. Cutting is typically not advised, as the thistle can still produce flowers and seeds after being cut, but I want to try it this season hoping that I’m late enough in the season that it doesn’t have time to regenerate — although the recent rains likely aren’t helping.

So if you see me out there channeling my inner Jamie Lannister, that’s why. I can cut a lot faster than I can pull, and there is still so much out there. We shall see if it’s effective or not, and make adjustments as the evidence indicates.

Each Spring we enter “removal season” on the Overlook and Montini properties. We begin with cutting back poison oak from the trail, as the runners begin encroaching as early as early February. So I was out today doing just that (see photo).

It was encouraging, though, as it seemed evident that previous years of cutting back the poison oak was reaping dividends. I was able to cover the bulk of the Overlook trail in one two-hour session.

After poison oak we will be on the lookout for Purple Thistle, as this non-native has been a scourge along the trail. We just started tackling this in earnest last year, so this year it will likely still be bad.

Following the Purple Thistle the Yellow Star Thistle will be coming in, by early March. That will likely keep us busy until early August. However, progress is being made on all these fronts and each year it becomes easier and easier, and some major patches are essentially already gone.

Once we get all these species under control, there are others we will need to tackle. Scotch Broom, for example, is one, although it isn’t as big a problem at the moment as the thistles.

If you want to help with this work, let me know! It basically takes a contractor bag (which I can supply you with) and gloves, although I frequently pull the Yellow Star Thistle gloveless.

abide – to endure without yielding

Readers of this blog and locals probably know that during the recent firestorm Cal Fire bulldozers cut fire breaks on the Montini and Overlook properties. We are happy that they did this, as it was essential to protect the town. But nonetheless we were concerned about these scars as we are entering the rainy season.

Cal Fire and the City of Sonoma worked hard to mitigate the impacts of those scars, and that work is already paying off.

The Stewards had planned to meet this morning to spread seed over the cuts, but we canceled due to rain. I went hiking anyway and spotted a lot of grass starting to poke through the straw that was laid down on some of the cuts. This was surprising to me, as bulldozers moved over those cuts not once, but twice (once to make the cut and again to spread the mounds of soil left from the first time) and grass is already coming up.

That’s a really good sign that Mother Nature is going to heal itself, with little intervention from us. We will monitor the situation, and seed where it looks like it needs it, but for now it might just be enough to let nature take its course.