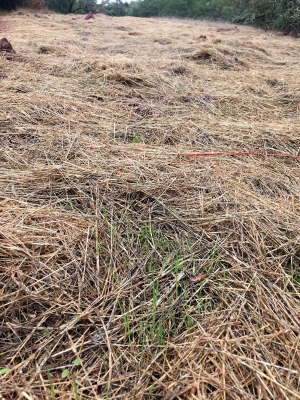 abide – to endure without yielding

Readers of this blog and locals probably know that during the recent firestorm Cal Fire bulldozers cut fire breaks on the Montini and Overlook properties. We are happy that they did this, as it was essential to protect the town. But nonetheless we were concerned about these scars as we are entering the rainy season.

Cal Fire and the City of Sonoma worked hard to mitigate the impacts of those scars, and that work is already paying off.

The Stewards had planned to meet this morning to spread seed over the cuts, but we canceled due to rain. I went hiking anyway and spotted a lot of grass starting to poke through the straw that was laid down on some of the cuts. This was surprising to me, as bulldozers moved over those cuts not once, but twice (once to make the cut and again to spread the mounds of soil left from the first time) and grass is already coming up.

That’s a really good sign that Mother Nature is going to heal itself, with little intervention from us. We will monitor the situation, and seed where it looks like it needs it, but for now it might just be enough to let nature take its course.