The crew, minus Greg Taylor, who had to leave early to open his shop. From left to right: Roy Tennant, Michael Studebaker, Priscilla Miles, Dan Noreen, and SOT Chair “Secret Ranger.”

Today six volunteer stewards gathered at the Sonoma Overlook Trail kiosk/trailhead to do the very first group “Rock Patrol.” Rock Patrol as it has been developed consists of the following: 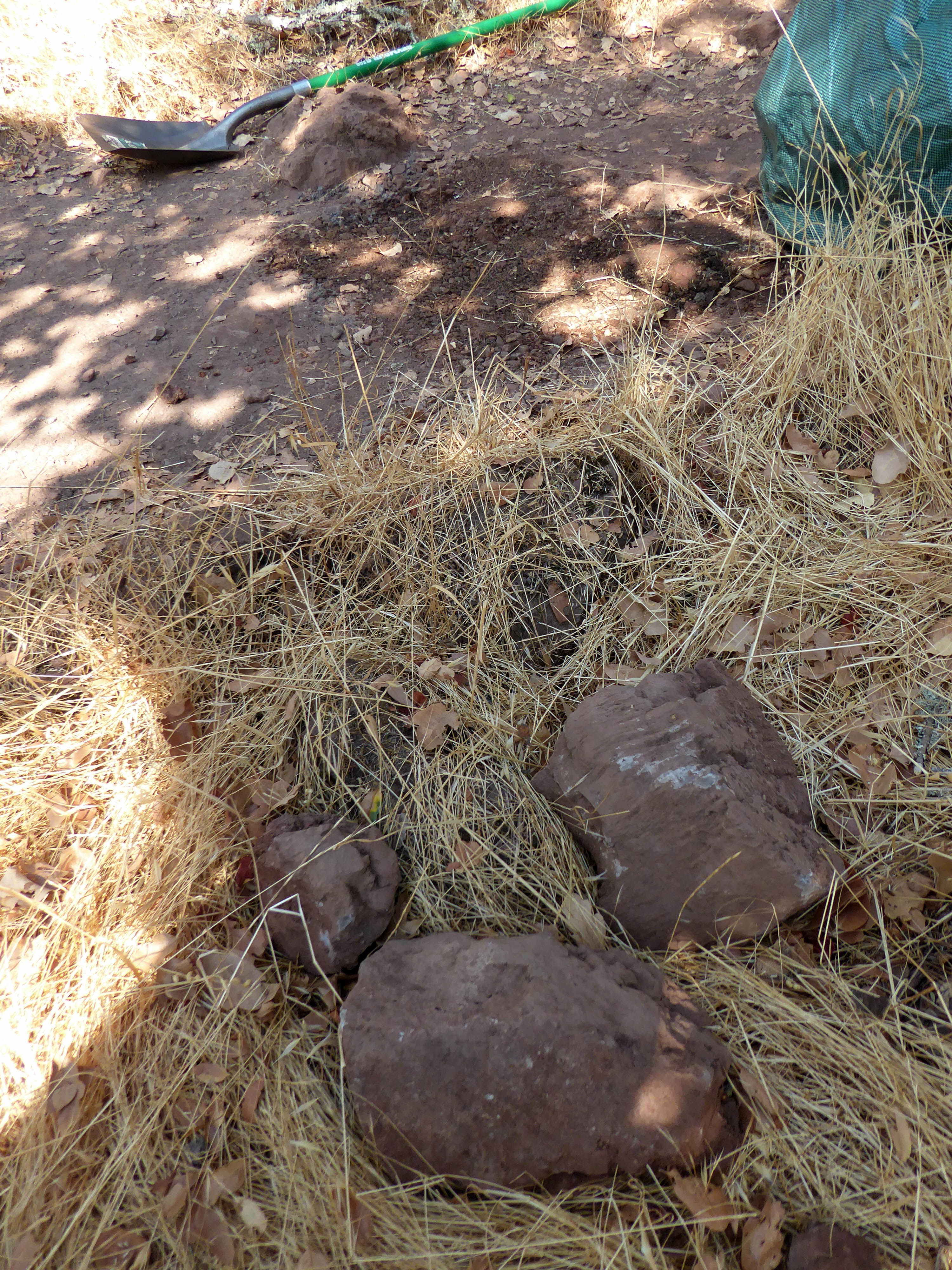 We were quite pleased with the many nuisance rocks (or worse) that we were able to remove (see picture of three large rocks and the smooth spot where they had been removed — it’s darker since it’s wet).

So if you happen to see a group out there with shovels, buckets, watering cans, spray bottles, and an assortment of other tools, that’s Rock Patrol. If any of the three readers of this blog want to participate, just shoot me an email. 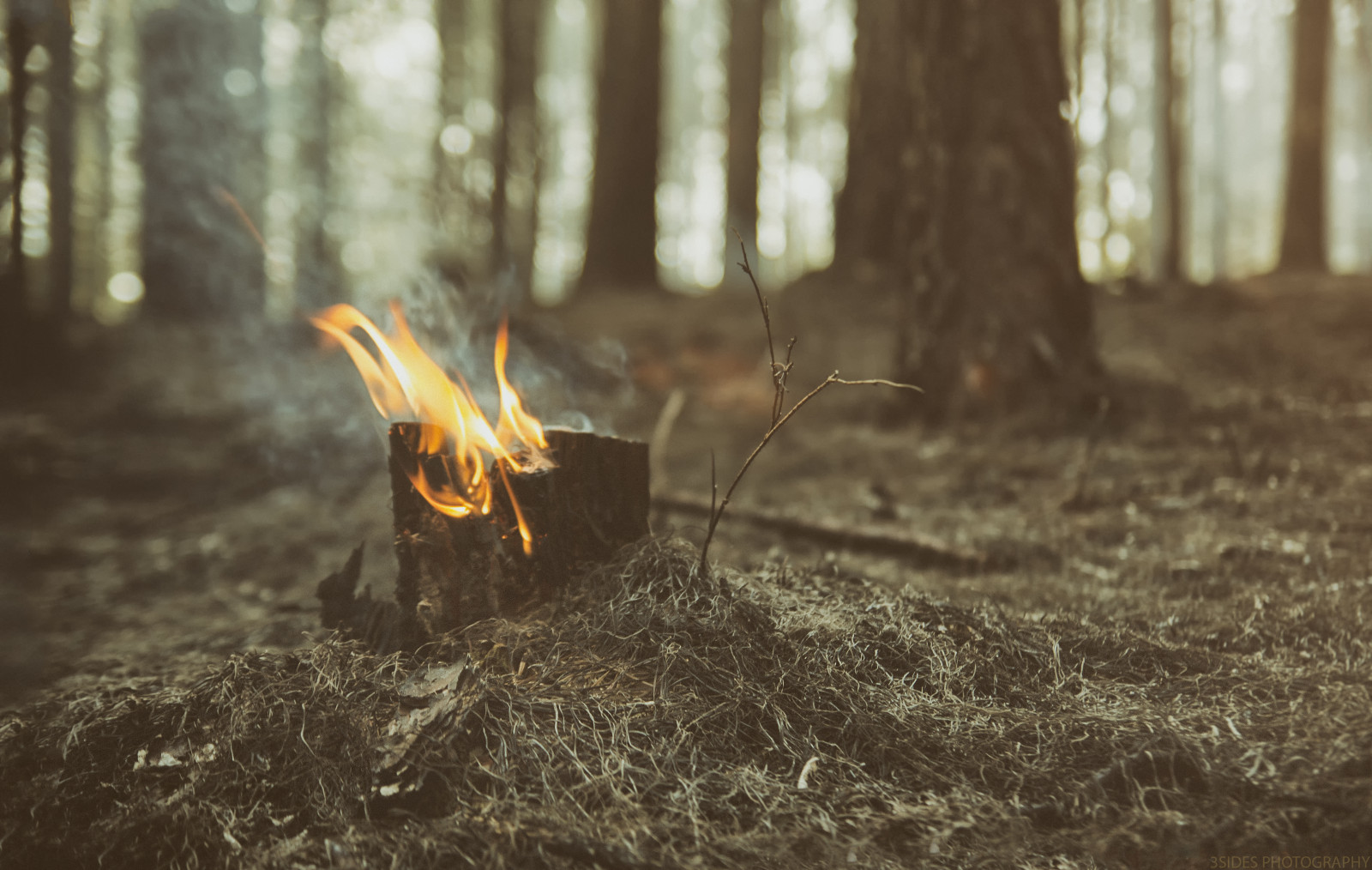 For some years, a few folk, down on their luck or simply seeking a wilderness home, have slipped up onto Montini Preserve or Sonoma Overlook lands each evening and made camp in the woods out of sight of the trails. Local legislation limits the enforcement of trespassing laws here; police and sheriff’s officers are ordinarily required to provide a place to which the evictees can relocate. A kind of leave-them-be approach has quietly endured.

Frequent fires on Montini this year have forced a sea change on policy, however. It has been decided that the risk to the town is simply too high. Going forward, the encampments will be removed and trespassing laws fully enforced.

There is universal regret among the many agencies and individuals that oversee and tend these areas. We are all deeply aware of the critical shortage of housing in Sonoma Valley and beyond and the complex needs of our local homeless residents. We’re working on it.

For more about this story, visit the Index Tribune’s take here.

Being a volunteer Sonoma Overlook Trail steward is potentially a very diverse job. It may include arranging and managing fundraising events, organizing weekly hikes, developing, producing, and installing signs and interpretational materials, cutting water bars (ruts to direct water off the trail), writing grants to get funds to re-route and rebuild the trail, pulling invasive species, cutting branches intruding on the trail, or who knows what else. Let’s just say it’s a diverse set of potential responsibilities, and no single steward does them all. We tend to specialize.

Thankfully, we have quite a large group of stewards of the Sonoma Overlook Trail, so we have people who bring all of these skills and more to our local trail system. We don’t all swing into action at the same moment; it may be quiet for a while and then a steward or three might step up when their particular skills and talents are needed. We all have something to give.

On this particular day, a steward who calls herself “Secret Ranger,” and who is our current Chair, brought out our recently purchased pole saw to cut some limbs off a low-hanging tree branch to make sure people can safely pass underneath it. On this same trip, we also visited the Montini Preserve to perform the same kind of operation—cutting branches to lessen the weight on an overhanging branch. In the case of the branch on Montini, we saw an immediate result of the branch lifting 4-6 inches right away, and likely more to come as the branch continues to adjust. This is enough to allow those who are 6 feet or under to pass without trouble, and likely some even taller folk. It made a clear difference, without removing the rather large branch entirely (it is easily 14-15 inches in diameter).

These are just some of the jobs volunteer trail stewards do, almost every day.

Anyone who enters the Montini Preserve from the 4th Street West trailhead knows Rigby the cat. Rigby has essentially “camped out” not far from where the trail starts for years. Hikers often stop and give Rigby some love before hiking up the Holstein Hill trail.

I mean, who wouldn’t? Just look at that face. Rigby is the official trail greeter, and he would have a volunteer name tag if we knew where to…um…pin it.

On Rigby’s part, he accepts the adulation with the equanimity of many cats who believe such worship is simply their due. And, well, it is.

But don’t think for a minute that Rigby is a lost cat. As his owner, Delisa Dodge says, “years ago we moved here and he loved to go down there every day because he loved the attention. He is well fed, vaccinated, treated for fleas and ticks and he is one happy cat.”

She even says that since so many people think Rigby is a lost cat, they scoop him up and take him to Pets Lifeline, but he is chipped and he is a “frequent flyer,” so they know to return him to Delisa. But, Delisa says, “everytime we come home he’s here for about 10 minutes and runs back to the trail.” Clearly he loves to hang out and soak up all the hiker love and treats.

I mean, who wouldn’t? Maybe I should look into that gig. Would you stop and pet and feed treats to a 64-year-old man? Yeah, I thought not. I guess I need to keep my day job after all.

We’ve been working well over a decade to get to this very day.

We’ve worked that long to control, and eventually eradicate, Yellow Starthistle. This year, for the first time ever, we’ve pulled every single plant we could find, no matter how small (see picture).

It’s frankly hard for me to describe what this means to me. It has been a long fight, and one, in recent years, that I’ve spent a great deal of time on during thistle season (January to August). The only thing thing in the last few years that has kept me from doing this activity, frankly, is hiking with friends and travel. If I don’t have a hike scheduled with my wife or a friend, or travel, I’m out there pulling either Italian thistle (the season which has ended), or Yellow Starthistle.

This year is no different in that regard, but it is very different in terms of what is left. We are, finally, reaching the end of life for Yellow Starthistle on the Sonoma Overlook Trail and Montini Preserve.

After going out to all the areas that used to have Yellow Starthistle, and repeatedly checking them, I can finally say, for the very first time, that it is completely gone this year — at least as completely gone as is humanly possible.

Let’s just say that when it comes to Yellow Starthistle this year, it’s the beginning of the end. Finally.