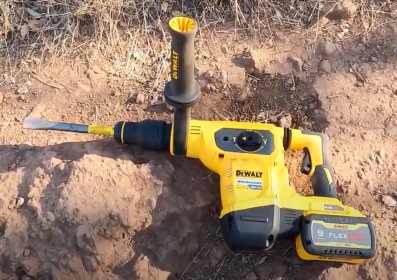 After I became Maintenance Chair, I began considering new kinds of trail maintenance activities. Since Sonoma Overlook Trail is a particularly rocky trail, over the past year or so I pioneered what I dubbed “Rock Patrol“. As it was originally conceived, it consisted of hiking the trail with a shovel and a pry bar, levering out rocks and backfilling with soil to remove “trip rocks” and make a smoother tread.

Over time, I added an activity that I called “trail smoothing”, which I conceived of as a more systematic effort over a stretch of trail from 6-12 feet or more. In this activity, we would remove many rocks from the trail bed and fill with soil and gravel, packing it down to recreate a smooth tread. This was devised as an activity for our monthly group trail maintenance work days.

Now I’ve added another activity that I’m calling “rock reduction”. To do this, we’ve purchased a cordless rock chisel/hammer/drill (pictured; click the photo to see a video of it in action). As I say in the video, it is a complete game-changer. I really don’t think there is a rock on the trail that we can’t now either completely remove or reduce to trail level or below.

Given that fact, I’m now open for any trail hiker or runner’s nominations of rocks to remove or reduce. Take a photo of your most hated rock and/or ridge of bedrock that impinges on the trail and send it to me at roytennant@gmail.com along with a description of where to find it on the trail. Just do your best; I’m pretty sure I will recognize it. Having nominated it, I will let you know when it has been removed or reduced.

Check out the video. It’s less than 2 1/2 minutes long and I think it does a great job of illustrating how we can now take down even some of the hardest rocks on the trail (many are much softer than the one in the video, which I had originally attempted to take out using a large, heavy, iron pry bar).

Rock reduction is now officially part of our arsenal. 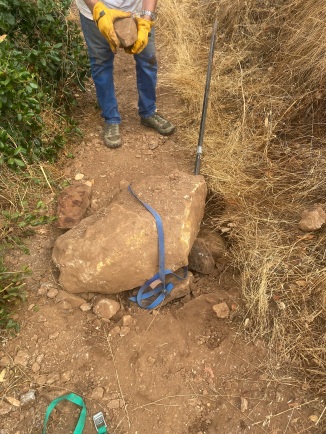 The massive rock we had to remove.

The Sonoma Overlook Trail is coming up on its 20-year anniversary. In twenty years of heavy use, the trail bed can become quite eroded, thereby exposing rocks that can become tripping hazards. Recently the trail stewards in charge of trail maintenance have begun a concerted effort to transform particularly rocky sections of the trail into smooth paths by removing rocks and filling the resulting holes with packed aggregate and soil. We call this activity “Rock Patrol.”

The last two standing monthly work days were dedicated to performing this work on two sections of trail under the Upper Meadow. Today, the section we worked on included a rather massive boulder (see picture) that we dug out and rolled off the trail. Now, instead of that tripping hazard there is smooth trail. 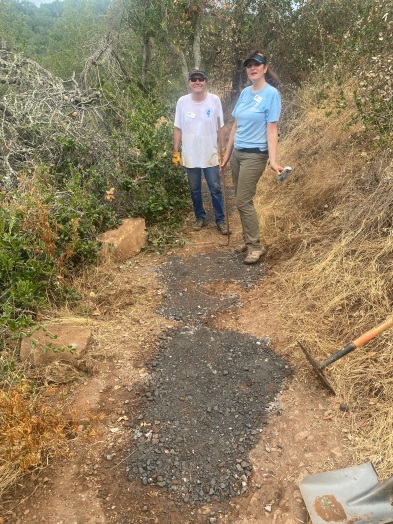 The final result (note the big rock on the left that we removed).

We recently set a goal to create 18-24″ of smooth path for the entire length of the trail, realizing that there may be some sections where this is not possible. Of course those of you who are familiar with the trail will understand the enormity of this undertaking, and therefore will likely also understand that this work will take years to accomplish. We won’t just do this work in group work days. Rock Patrol can also be a solitary activity, as sometimes all that is required to make a section of the trail safe is to remove a solitary “trip rock” from the middle of the trail. That can be accomplished by a single volunteer.

The Sonoma Raceway Hike this past Saturday was a big success. Fifty hikers came to enjoy the beautiful vista view and companionship of other hikers.  $2,600 was raised for trail maintenance and rehab. (You may have noticed that the trail was recently repaired. It now has better footing and easier grades for all age groups.) A huge thank you to Sonoma Raceway for opening up the back acreage for hiking and morning coffee and refreshments. Also, thanks to the volunteers that came early in the morning to set up the hike and take registrations… and lead the hike. Mother Nature played along with a gorgeous day! 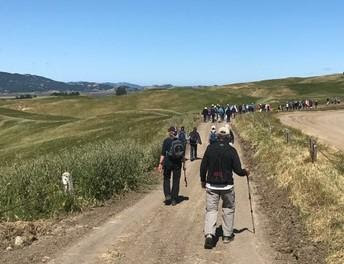 After two years of cancellations due to COVID-19, we are thrilled to invite you once again to join us on this self-guided hike on the pristine 1,600-acre Sonoma Raceway property which is not usually accessible to the public. This special place offers gorgeous 360-degree views; come and see spectacular wildflowers!

8:00am – 8:20am: Arrival/Gates Open
8:20am – 9:00am: Refreshments (Donuts & Coffee) on the Redwood Deck overlooking the Raceway and Sonoma Valley. Sonoma Raceway hosts Chelsea Lazzari, Randall Brown, and Bobby O’Gorman will provide an introduction to the 1,600 acre Sonoma Raceway property before the hike begins.

After two years of cancellations due to Covid, we are thrilled to invite you once again to join us on this self-guided hike on the pristine 1,600-acre Sonoma Raceway property which is not usually accessible to the public. This special place offers gorgeous 360-degree views; come and see spectacular wildflowers!

Last weekend’s refreshing rain storm is likely to have rejuvenated more than just our local waterways:

“…for someone hiking, ticks will have gone from practically zero a couple of weeks ago to being out…and their numbers will probably be increasing through January.”
https://www.pressdemocrat.com/article/news/rain-is-about-to-set-off-the-tick-time-bomb-in-california/

A few tips from the American Hiking Society:

If you find that you have been bitten by a tick, save the insect after removal and submit it to Sonoma County Department of Public Health for Lyme testing:
https://sonomacounty.ca.gov/Health/Public-Health/Laboratory/Lyme-Tick-Test/