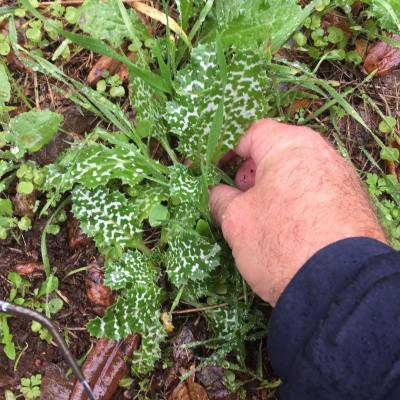 Lately I’ve noticed that Italian Thistle has been coming up, since recent rains have kept the soil moist and we haven’t had freezing temperatures at night. In the past, I haven’t started pulling it until February or March, but I see no reason to wait. When the soil is moist it’s easiest to get it out by the root, and since there is no danger of it going to seed it can be simply tossed aside. Later, we will need to bag it and carry it out, which is no fun.

Although we’ve been making very good progress with Yellow Star Thistle (YST) after half-a-dozen seasons of concentrated effort, and we may actually be close to declaring victory (fingers crossed!), Italian Thistle has, in a number of cases, apparently been moving into the new territory cleared of the YST. This is alarming, as Italian Thistle is even more dangerous than YST, as it will grow anywhere. At least YST is limited to sunlit meadows.

Italian Thistle has essentially overrun the Montini Preserve, so my only goal there this year is to keep it off the trails so it doesn’t bother hikers. On the Overlook Trail property, I will start the same way by first concentrating on the trail edges, but then I also hope to be able to work on the Upper Meadow, as there are clumps there that threaten to spread and coalesce across the entire meadow unless it’s controlled.

So if you’re out on the trail and see what appears to be a gardener pulling weeds, it’s just me, keeping up the ongoing war against invasive species. Maybe say Hi.