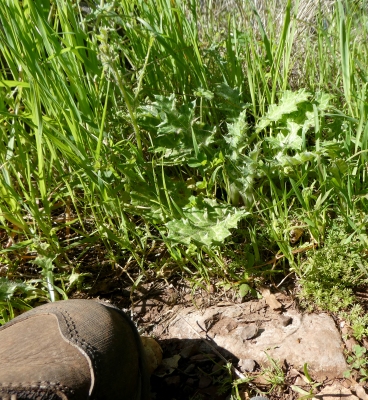 Tripping down the trail today I thought to myself, “Oh, hey, there’s one!” I had spotted an invasive purple thistle plant at the trail’s edge (see pic). I stooped to pull it out.

As volunteer trail stewards, our remit includes not only maintaining the trails, but also helping the City of Sonoma to maintain their property that the trails traverse. This includes removing invasive species such as broom, purple thistle, and yellow  star thistle.

Purple thistle season begins in early Spring, which means we are already working to remove it. Later in the season the yellow star thistle will start to come in. Since we’ve been attacking the yellow star thistle for several years with vigor, we are seeing some real progress on eradicating it from the Overlook and Montini Preserve properties.

However, purple thistle is quite another story. Mostly due to years of cattle grazing, purple thistle has essentially already overrun the Montini Preserve. So at this point we only focus on yellow star thistle there. But on the Overlook, we think we have a chance to knock back the purple thistle so we are working on it as well. Since we only began our work on it last year, there is still quite a bit of it on the trail.

Today, as I stooped to pull the plant I had spotted I thought to myself, “Oh, wait, there’s five — no ten, crap, there’s a lot!”

I had momentarily forgotten that until the day when we reach the point of eradication — years, perhaps even decades from now (if ever), there’s never just one.

3 thoughts on “There’s Never Just One”