Today I changed the display of our “Hikers Gallery,” which we try to do every now and then. I put up a display to advertise our new trail movie, The Sonoma Overlook Trail and Montini Preserve. I also created a Moo card advertising the movie, putting some of them in a small plastic dispenser at the main trailheads and at the Hikers Gallery.

My hope is that by showing the diversity of animal life, plant life, and trail moods, that hikers will be inspired to return again and again, and to bring family and friends. It can take years of hiking to see some of the insects and wildlife we can depict in a movie such as this, so the movie can condense those years into four minutes. We can also show dramatic moments that are rare, like when the creek on the Overlook Trail is high and the waterfall on the Montini is raging across the trail.

In the end, I hope our hikers enjoy the movie as much as I did making it, and will be inspired to hike the trail for as many years as it took to accumulate the photos that comprise it. 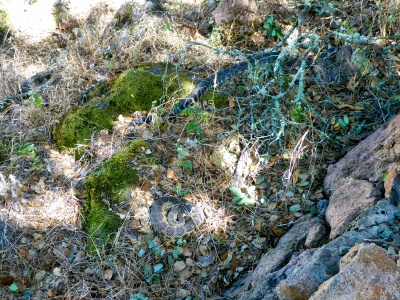 We are thoroughly in snake season now, with rattlesnake sightings up dramatically this year. That news made me dismayed that I had yet to see a single one, despite being on the trail (and off) every day. All that changed today, when I saw two in one place (see photo). One appeared to be my old friend “Big Jo(e)”, which has a characteristic dark coloring and at least ten rattles. The other snake was new to me, with a distinct greenish hue and also a large number of rattles. It is the one coiled in the picture. I guess now I have to come up with another name!

The location where they were sighted was off the trail to the left when going up Holstein Hill trail, just prior to the wide wheelchair turnaround spot, also called “Coyote Point.” Since one snake subsequently slid into a crevice in the rock wall, it’s possible that there is a den there, so be extra careful in that area.

Meanwhile, keep your eyes open anywhere on these properties and stay safe out there!

This week I found the first tick of the season crawling up my pants. In my experience, ticks are more prevalent in the wet period of winter and spring than they are in summer. Therefore, you will need to be vigilant for ticks for the next several months at least.

And being vigilant can be hard, as they can be quite small (see picture). When you’re inspecting yourself, look for any small dark dot. It’s good to look over yourself and your companions once you’ve left the trail. Even better, take a shower after your hike, so you can do a thorough body check. Try not to brush against trail vegetation, as they like to sit on the ends of grasses to get on you as you brush by.

Finally, if you do get bitten, extract the tick carefully with tweezers, put it in a small ziploc bag with a moistened cotton ball and send it in to have it tested for Lyme disease. I did this twice last year and thankfully neither tick had the disease. However, I tend to have a serious reaction to the tick bite if it has been in me for longer than an hour or so, which includes pain, itching, swelling, and a temporary scar at the bite site (which can last for months).

So by far, the best strategy is to prevent yourself from getting bitten in the first place. Stay safe out there!

I’ve posted a lot about invasive species removal from the Overlook and Montini Preserve properties. Anyone but me would likely say too much, and who could blame them? Not me.

But in reviewing what I’ve written over the years about it, I realized I’ve never explained why we fight this fight. So now I rush to make good this oversight, and try to explain why I go out, nearly every day I can from January through July or beyond, and fight something that will very likely never be defeated.

First and foremost, it’s necessary to highlight the fact that species such as Italian and yellow star thistle will completely take over an ecosystem. You don’t need to go far to see this happening. The picture here was taken at the Sonoma Valley Regional Park, and shows how Yellow star thistle in the foreground, and Italian thistle in the background, have essentially taken over a meadow. This crowds out native plant species and even mammals.

Thistle creates a “no-go” area for wildlife, who avoid such patches until they can’t be avoided at all, and then they move elsewhere. This of course leads to a an ever-increasing monoculture and “dead zone” where only the invasive species thrive. “Invasive species are among the leading threats to native wildlife,” states the National Wildlife Federation, “Approximately 42 percent of threatened or endangered species are at risk due to invasive species.” This is clearly a serious threat that must be addressed.

The impacts of this monoculture are many. Wildlife doesn’t have the food sources they should. The lack of diversity in plant life affects the diversity of everything else — insects, reptiles, birds, and mammals.

Invasive species can also affect the chemistry of the soil, as well as the intensity of wildfires.

There are, then, many reasons why we fight this fight.

Recently as I walked along the main path in the Sonoma Valley Regional Park, I was in despair seeing the extent of Italian and Yellow star thistle invasion. It was heartbreaking to see. But I had to turn away, knowing that I have my own battle to fight on the Overlook and Montini Preserve properties. Thankfully, the Yellow star thistle is nearly eradicated on those properties except right along, and next to, Norrbom Road. But we have a long, long way to go against the Italian thistle, let alone Scotch and/or French broom and other invasive species that we have yet to assess, let alone seriously address.

In the end, we fight this fight because the alternative is so much worse. We fight because we love the native ecosystem and we believe deeply in saving it. We fight because we have no choice but to do so, loving these properties and trails as we do. Frankly, that’s the absolute best reason ever to fight for something — for love. So if you see me or my comrades out there, with a large bag and a glove, you’ll know what we are doing. We are fighting for something we love.

That’s why we fight.