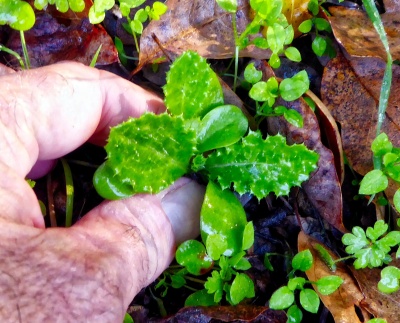 A young Italian thistle, which can grow to be over 6 feet tall.

Today I spotted the first Italian thistle plants (see picture) of the 2020 invasive species removal season — or what I simply call “thistle season,” as the species we’re most focused on at the moment are the Italian and Yellow star thistle. These species are fully capable of taking over entire ecosystems and driving out native species and even wildlife. Thus we fight.

Thistle season has grown to last from the end of December, with the early onset of Italian thistle (slightly later this year), to well into August with the Yellow star. That makes thistle season nearly 8 months long, with only 4 months off. It doesn’t mean that we’re out there every day, mostly hand-pulling the weeds, but it means that every day we can starts to add up to a real difference. As it is, we’re witnessing a decrease in the volume and extent of Yellow star thistle, since we’ve attacked it for close to a decade. It’s even gone from some areas. But Italian thistle has essentially overrun the Montini Preserve and it is threatening to do the same on the Overlook Trail property. Thus, our recent efforts on Italian thistle have tended to focus on the Overlook Trail — first to eradicate it from the trail verge, where traffic on the trail can spread it, and then to fight it back from the trail into the surrounding areas.

Last year we were successful in clearing it back from the trail, but much beyond that was mostly untouched except for a few select areas. This year we’re hoping to have the time to take the fight further out from the trail, and especially hit some meadows where it hasn’t yet become widely established, such as the Upper Meadow on the Overlook. But the season has just begun, so we shall have to see what we can accomplish this season.

Meanwhile, if volunteering to help us pull these weeds is something that might interest you, I recommend you first read this post: “‘Don’t Look Up’ and Other Lessons from Invasive Species Removal.” We’re not trying to scare you off, really we aren’t, but it’s best to approach this work with your eyes open. Trust me on that. If you’re still game, let me know.

If you don’t wish to volunteer, but see us doing the work when you hike, throw us a wave. Feelings of pity and “there, but for the grace of God…” are also appropriate.

August seems like a long, long way off from here.