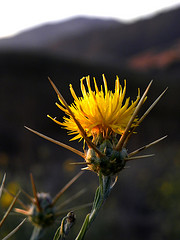 Long-time sufferers of reading this blog know that we have been fighting a battle against invasive species. Not really a battle, actually, but a war of attrition. We just hope we can outlast them.

This season I made a rookie mistake of judging the extent of the Yellow Star Thistle (YST) too soon in the season. Seeing very little, I allowed myself to drift into a feeling of complacency and accomplishment. Then I went away on vacation for three weeks in July, just returning earlier this week. And wow, what a difference a few weeks made. We are far from out of the woods with Yellow Star Thistle. Yesterday I even had to do the unthinkable — leave some behind. My large contractor’s bag was simply too full. Today I returned and got that patch as well as many others. And that’s why this post.

I know we’re in a long game, and I know how it’s played — perhaps better than most. But anytime you set yourself a big audacious goal you’re running the risk of having periods of disappointment and depression. I’m having one of those now. Don’t worry, I’m not asking for sympathy or encouragement. I know what we’re in for, and I also know I’m good for it, and that this moment will pass, as it always has. But I want to take a moment to acknowledge that when you play the long game you’re going to have these periods of disillusionment, but that doesn’t mean you have to give up. On the contrary, they are to be expected and weathered just like the periods of euphoria and accomplishment.

Also, I know that the years of work are having results, just not as rapidly and thoroughly as I want. But I’ll be back out there tomorrow and the day after that. And YST: I’ll see you next year too, and the year after that. Don’t be late. I won’t.

2 thoughts on “Chasing the Star”