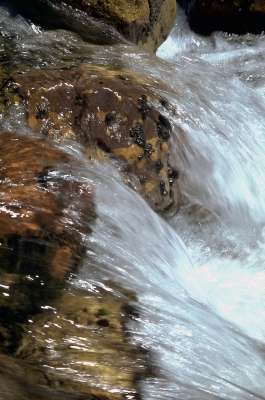 The other day as I was tripping down the Overlook Trail alternately dodging rocks and using them as stepping-stones, I was reminded about how I had gained a useful life skill. It no doubt began when I was young, first on an Indiana farm (before I turned 6), then later in the foothills of the Sierra as a teenager and young adult.

But it was really solidified after I started running trails at 18, in both Yosemite and the Grand Canyon. I don’t think there are any rockier trails, especially since a number of the trails I ran and hiked in the Grand Canyon were not maintained. When you run really rocky trails you need to make split-second decisions about foot placement while also keeping an eye out for what’s coming up. In other words, you need a highly-developed sense of spatial relationships, often down to fractions of an inch.

At 21, I honed these skills further by becoming a commercial river guide. I began by guiding on the Stanislaus River in  California, now buried by the New Melones Dam. As a river guide, you need to be very aware of just how the water is flowing downstream, and how it interacts with the shore and rocks in the river bed. Again, skill with understanding spatial relationships is very important.

After guiding for one summer in California I got a wonderful opportunity to raft the Grand Canyon on a 30-day private trip. After learning to raft on about 1,500 cubic feet per second (CFS) of water flow, I was suddenly on up to 20 times that much water, flowing through a much larger river bed. I trashed through the first rapid because I didn’t yet have the scale down. I didn’t grasp the vastly different spatial relationships of a big water river. In my mind, I was still rafting a small water river.  But I learned quickly, and that was the last Colorado River rapid I bungled that badly.

These spatial skills saved my life at least once. Sometime later I was driving south on Highway 101 north of Willits at freeway speeds and I noticed a car passing oncoming traffic. I saw that the driver would have just enough time to duck back into his lane before I reached the car, so I didn’t fret. Until, that is, he ducked back into his lane and I saw that there was another car behind, also passing. At that point I was virtually on top of this second car, so I instinctually swerved onto the shoulder of the road and we passed three abreast. I knew that I could do that maneuver because I could make split second decisions about space. And I was also extremely lucky that the other driver didn’t do the same.

Today, I rarely experience anything nearly as dangerous or exciting as I’ve described. But every time I trip down the Overlook or Montini trails at speed, I know where I got the skills needed to do it safely. They were earned, one day at a time, on many rocky trails and rocky rivers. And I’m here today because of it.