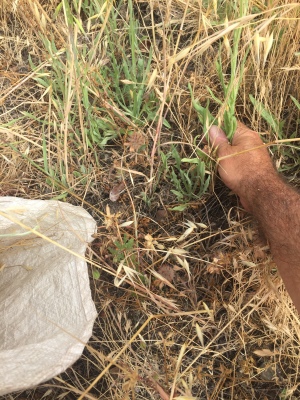 Lately I’ve been too busy with a more important project to get my daily hike in on the Overlook and Montini trails. But yesterday I cleared some time and made my way there. I knew that we were well into the season of the invasive Yellow Star Thistle, so I took along a feed sack to pull what I could.

Those of you keeping score at home likely know that the Overlook Trail Stewards have been waging war against this pest, and that war has been stepped up in recent years. Last year we were successful in eradicating it from the main Overlook and Montini properties. We knew it would be back this year, but we also figured that given how we beat it back last year it likely wouldn’t be as bad.

Having inspected a couple locations where it was bad last year I’m happy to say that it isn’t nearly as bad this year. We are indeed making progress, but we also know that this is a multi-year war and that it will require us to be vigilant and relentless.

This war is led by volunteer Steward Rich Gibson, who has called work days for groups to get together and take out both Yellow Star Thistle and Scotch Broom – another non-native that has a tendency to take over the landscape. Without efforts such as these our landscape would look very different than what it should be, and has been for centuries.