For a while now on Facebook (friend me, maybe?), I will occasionally post a “Remains of the day” post, with a picture captured on the trail of some remains of an animal that I encounter while hiking. So if you are squeamish about such things, now would be a great time to bail, as I’m about to discuss these. Just sayin’.

For those of you still here, here we go as I recap some of those encounters — never sought, but not avoided either. Every living being deserves to have their lives (and deaths, witnessed).

Almost always the method of demise is mysterious, as it was to me when I encountered this American shrew mole (I think that’s what it is, but I’m open to be corrected on that) in the middle of the Holstein Hill Trail on the Montini Preserve. Why had it died? It didn’t appear to have any trauma, or other obvious signs of why it had expired. So…why? I’ll never know, but there it was. I never saw it again, although I’m up on the trail almost every day. 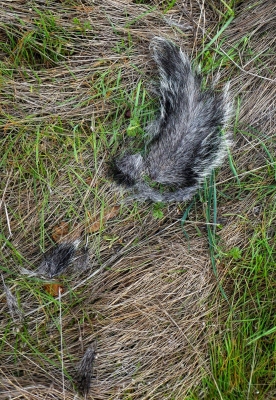 Perhaps more easy to interpret is this scene of a squirrel pulled apart. I would guess a coyote was the predator, but it could be a fox, or a bobcat, or even a mountain lion. But as I came upon it on the Montini Preserve (isn’t it interesting that I can remember exactly where I found these remains even years later?), my guess is a coyote. Coyotes are frequently evident on the Montini, whereas it may be a bit close to civilization for a mountain lion. I wouldn’t rule out a fox or bobcat, though.

It frankly surprises me that a predator was able to catch a squirrel, as I’ve seen them scamper up trees with a rapidity that puts my sorry running speed to shame. Either it was sickly, or a predator was really skilled or lucky. I will never know which. 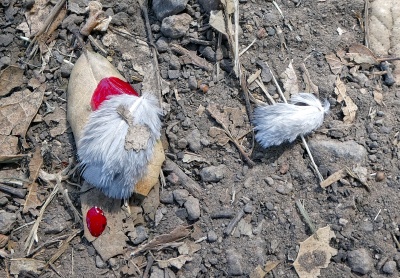 Then comes this mystery, but one that clearly happened not long before I happened upon the evidence. The blood hadn’t yet dried. Bright red and still very liquid, with a few feathers, clearly some bird had only recently fallen to a hawk or owl, or? Again, I will never know. But the evidence was clear — a bird of some kind was no more, felled in a moment by something hurtling unexpectedly from the sky.

When I discover tiny dioramas like this, I can’t help but pause in my determined hike up the trail and ponder on the uncertainties of life. Not one of us owns a guarantee on life, although we may fancy that we do, or at least delude ourselves toward that end. This bird no doubt thought it was doggedly in pursuit of food, or water, or nest materials, or whatever, and it was cut down in the process out of the blue. Can any one of us have more surety than that bird? Maybe. But perhaps not. Actually, I know not. 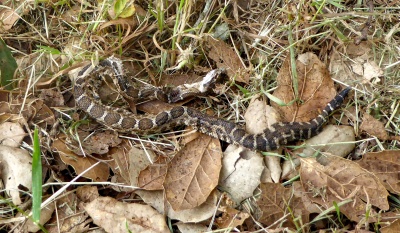 Sadly, I think I know who this next predator is. Since this gopher snake was killed, but not eaten, I suspect a misguided hiker who believed that he (almost undoubtedly a male, sorry guys, I know my gender) had encountered a rattlesnake and chose to kill it. Rattlesnakes, should they be encountered, should never be killed, just avoided. And they make it easy, since they frequently (almost always, in my experience) warn before they try to strike. They don’t want to mix it up with you any more than you do. Just take a wide berth and both get on with your lives. We don’t need more death in this world.

In the universe into which we’ve all been born — humans, cockroaches, elephants, what have you — death is the price we pay for life. Having said that, I don’t think many of us forsee our own death before being faced with the reality, whether it is a creeping but vicious disease like cancer (FUCK CANCER!), or something more immediate, like a heart attack or a violent accident of some kind.

Like you, I don’t know how I will end. Neither did any of the animals depicted on this page. It happens, and mostly it isn’t in our control, and we must accept that as part of our bargain for existing in this reality.

I just know that every time I bear witness to remains like those depicted on this page I pause, look up, scan the horizon, and try to really take in the world in which I’m still alive. I enjoy the breath filling my lungs, the heart that still beats in my chest, and the eyes that can still enjoy the light the sun brings to our planet. It is, in the end, all that any of us can do, day by gorgeous day.