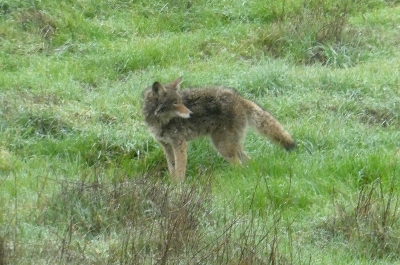 If you’re a reader of this blog you likely know that dogs are not allowed on the Montini and Overlook properties. However, there is one type of canine that is definitely allowed, Canis latrans, or coyotes. I happened to spot one today out in the meadow below the Holstein Hill trail on the Montini Preserve (see photo).

Coyotes are abundant throughout North America, and they thrive in the kinds of mixed meadows and woodlands we have here in Sonoma Valley. They eat small game such as rabbits, rodents, fish and frogs, and deer. They can also consume snakes, insects, and even fruit or grass (but most of their diet consists of mammals). Near humans, they have been known to eat garbage and pet food.

Canis familiaris, the domestic dog, is descended from the coyote. So you could say that we owe coyotes quite a bit.

Keep your eyes peeled the next time you’re out on the trail, and maybe you’ll be lucky enough to spot one (or hear one).

2 thoughts on “The Other Dogs”